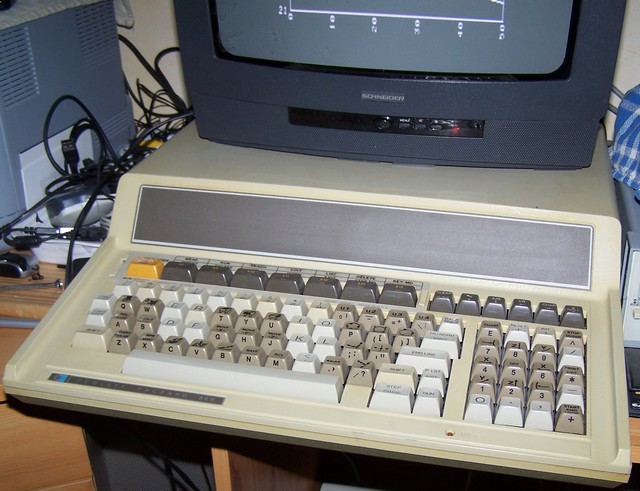 A computer for scientific calculations with a calculator mode!

I'm looking for a monochrom monitor!

This computer can drive several Data Aqusition peripherials and easely compute calculations and graphics with a strong BASIC! A machine for maths...

How to recreate floppies from the HPMUSEUM.NET ?

This site offers free download of several disk images with HP applications such as games, graphic pac, ... The problem comes from the floppy format: their images are mostly 5"1/4 disks and the 9122 uses 3"1/2 disks with a higher capacity.

Thanks to the help of Ansgar Kueckes here is what I've been able to do: Then, you have to download a TD0 image, let's try with GALAXY PATROL whose file is GALPATRL.TD0.

Now, every sentence I type under DOS, validated with ENTER, appears on the HP86 display ! (to quit under DOS, type Ctrl+Z and ENTER, under HP86, use SHIFT+RESET).

Sending a TEXT file to the HP86

You can send a BASIC, an ASSEMBLY source or just another TEXT file to the HP86 using my little tool that comes in two parts.


Receiving a TEXT file from the HP86

Sending an IMAGE to the HP86

Again with my program

(Download it!) , you can send an image to the HP86. The format is BMP monochrom, without compression, size 400x240 corresponding to the GRAPH mode of the HP.

Receiving an image from the HP

Here is a little tool to emulate a color plotter through the RS232 interface.