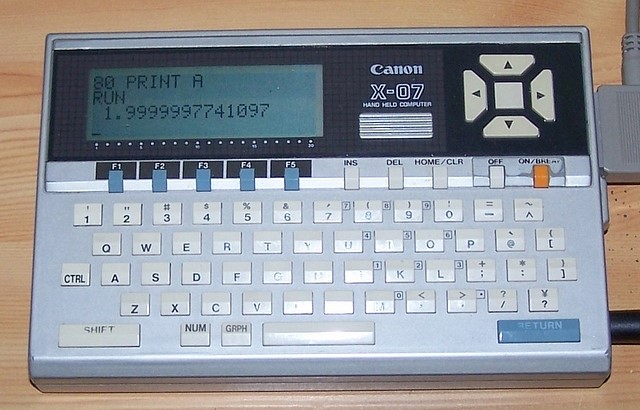 A machine I saw long time ago, when I was a student. It belonged to a friend, he had the full system with the color printer. I was really excited by this little computer!


More infos about the X-07 serie

After so many years, the battery pack is dead. You could think that the printer will run with its external PSU. But no... If no battery is present, then the printer refuses to power on. Following the instructions of "Spéléo" on the Silicium site (in french), I managed to make it work. The idea is to connect the power input to the battery pins: this simulates that a battery is present.

A Microsoft & Canon Basic (1983) fills 20KB of ROM. A complete one with some surprising features:
Cassette interface

Too bad that I don't own the XP-140 application card containing a monitor-disassembler (to be confirmed...) so I use a tape program that appears to be excellent and smartly interconnected with BASIC. It is called "AS-VSN 3.0" by J.Outhier. Once loaded it remains in memory and its functions are called with key combinations (in command mode) or with EXEC (at run rime).

Well, how does it work? First, this BASIC don't have the BLOAD or BSAVE functions. So, to load the assembler (that is itself a binary bloc) a BASIC routine is required to poke the bytes into memory. That's the work of LOADAS.
First step, load LOADAS:

This message is then displayed:

Now, the assembler is available, ready to act following our instructions. And we still have the control of the BASIC interpreter!
You write your assembly program directly into BASIC lines with REM (or its equivalent ' with Shift 7), here is an example:

A view of the program

Now I use Ctrl+A and the two-pass assembler starts working. It displays PASS 1, then PASS 2 then Ok if everything went right. The default address to create the routine is $1C00 (this can be modified with ORG). To run my routine, I type:
Now I can see a pixel on the down right corner of the LCD screen.

Better, you can mix BASIC and Assembleur, let's complete the previous program to make it act automatically:
This system looks to me very powerful because with a single source file you can work both on the assembly and BASIC parts. The assembler is resident and becomes part of the system (until you remove it with NEW or Reset).